The base held an Easter Egg Hunt today so Scott and I took Damien. We arrived just in time for the 0-2 year old age group. We didn’t know we had to supply our own basket, so Scott just collected the eggs in his hoodie pocket. Damien was a little hesitate at first, but as soon as he understood he’d be picking up colorful eggs off the ground and handing them to Scott, he was all for it. I was rather annoyed at the amount of parents that I saw picking up the eggs and putting them in the kids’ baskets. What fun is that for the child? Well…unless it was a baby…but that wasn’t the case with most of the parents I saw doing this. Shame on them! Enough about that…enjoy these precious photos of Damien! You will notice that Scott has grown a ridiculous mustache. It’s just for fun during the month of March. 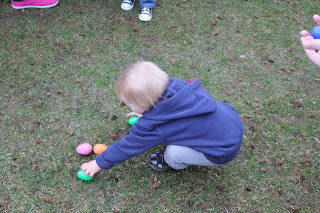 I forgot to mention. EDIS came out on Wednesday. I guess I misunderstood the appointment. This appointment was just for EDIS to verify themselves that there was a speech delay. Now that they’ve established that, they need to come out and do an evaluation to see if he qualifies for assistance. EDIS did say that although he isn’t really saying a lot of words that all other areas are great. Good problem solving abilities for his age 🙂 I’m trying to think of new words he can say now. I think “no” is new.

Our hot water heater isn’t working so now we’re stuck without hot water. Fortunately, our landlord is on the ball and got us a repair man out to our house in less than 24 hours. They worked on it this evening, and although they didn’t get it fixed tonight, they’re coming back tomorrow with parts to get it working again.

At least it’s not the dead of winter!

I haven’t been taking too many pictures lately so I had to take a couple today. He’s growing up so fast I just can’t believe it! Below, he’s playing in his tent. He loves dragging stuff in there to tumble around with (notice the pack of paper towels…). Then there’s a pic of him eating an Oreo. He loves to sit on the chair like a big boy. 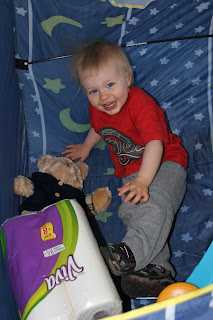 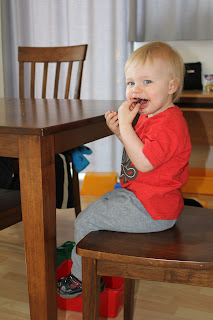 The sign language is going well. He knows Milk, Food, and More. He does seem to use them when he wants those things. It’s really nice to have an idea of what he wants.

This has been an interesting week with Damien. At daycare he has started shoveling the other kids and sitting on them. Today I was told he’s focused his attention on just one other kid–the smallest, quietest one. He was sitting on him and bouncing at one point. The teachers think it’s a dominance thing. I have no clue where he gets it from. Scott and I are the most non-confrontational people ever.

Damien’s been crying a lot at home still. I asked about it today with his teachers. He only cries at daycare for obvious reasons like another kid took his toy away. At home, it’s a little bit harder because he’s not easy to console. Tonight wasn’t so bad though. He even was calm during his bath which he hasn’t been lately. We still put him to bed early tonight. We think he’s tired and frustrated. He isn’t able to communicate what he wants. He does know how to do the sign language for “milk” and “more” now. His appointment with EDIS is on the 28th. I’m sure it’ll just be an evaluation to see what he even needs. For all I know, they’ll tell me he doesn’t qualify for the program. We shall see.

This week hasn’t gone the best. Aside from some added stress at work for Scott and me, Damien has had a cold the last few days. He’s been crying a lot and isn’t sleeping the best. Also, he was bit by another kid at daycare TWICE this week. Once on Thursday on his hand and once today on the knee. Then, this afternoon on the playground he was very upset and crying and ended up biting his own lip which bled. He seemed to be in a decent mood when we got him home tonight though. There was a few other upsets this week like trying to sell a few items online and almost getting into a car accident.

I’m hoping for a good weekend for us. We need it.

Damien just finished his first week at the CDC and it all went well. The staff is friendly and I feel comfortable with them. I think I have all the rules down so that takes away some of the stress. Damien will be on a set schedule which will make things easier for the weekend. He gets to go outside twice a day which is probably his favorite part (aside from eating). The meals seem like they’re healthy, but sound like something I would want to eat. Scott and I are very happy with our decision.

I was a little bit concerned at first with how Damien would adjust. He just seemed so cranky in the mornings and evenings, but the teachers had nothing but positive things to say. He’s a good eater (which I already knew), he plays nice with the other kids, he only sleeps one hour out of the two for their scheduled nap time, but apparently he just stays put on his cot for the remainder of it. How awesome is that? We did have to make a couple adjustments at home. He seemed SO hungry at the end of the day when I would pick him up, so I’ve been keeping snacks and juice in the car for him to eat on the drive home to hold him over until dinner. We’ve also been putting him to bed an hour earlier. He’s been cranky for us because he’s been SO exhausted from all this activity all day.

Below is a picture of Damien in the tent we bought for him today. Prince Damien has already managed to break a piece on it so it’s only a matter of time before he won’t be able to use it anymore. Oh well, he loves it while it’s around anyways 🙂 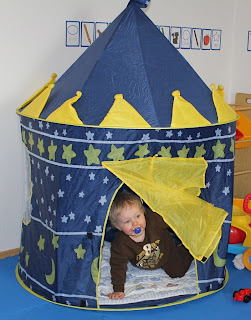 Damien went to his 18 month check up today–complete with immunizations. He now weighs 25.35 lbs and is 34.72 in long. Weight wise, he’s in the 40th percentile, while height wise is the 96th percentile.  With his head circumference he’s in the 15th percentile. So I guess that means the average kid is a little fatter, shorter, and has a large head than Damien. Weird.

Anywho, he has been officially labeled with a “speech delay”. Before they were just monitoring him, but now they’ve referred us to EDIS who are supposed to be calling in a week or so. It’s supposed to go along with some speech therapy. I guess it can’t hurt anything.

Below is a video of Damien and me from the other day. He’s looking into the camera so he’s watching himself as he’s talking. He wants to touch the screen a lot so he’s hard to get a decent video. At least you get to hear him making some sounds.

Today was also Damien’s first day at the CDC. Because of his appointment, we didn’t go over there until 0930 and all the kids in his room were playing outside. He was a little shy at first, but quickly started exploring. When I came to pick him up tonight, the lady said he was upset for about an hour after coming inside. Sounds like him. I’m sure it was a mixture of a lot of things. He already had a big morning before going to a new daycare. Overall it sounded like he had a good day.

For the past 15 or so months, Damien has gone to the Little Angels International Daycare with the Chandrakumar family. But sadly, today was his last day. We were on the waiting list for the Child Development Center (CDC) on Ramstein and we received the call this week that a slot is available and Damien can start on Monday. Scott and I decided that taking him to the on-base daycare would be best for Damien because we were pretty impressed with their program during the first “Give Parents a Break” visit. We also felt it would help with Damien’s speech development if he were only around English speakers for a while. It would also be nice to speak in depth with Damien’s teacher about his progress without a language barrier. I’m a little bit intimidated by the CDC though because it feels like this super mom group where everyone knows what they’re doing and there are so many rules to learn! We’ll see how it goes.

Aside from mama and dada, Damien seems to be saying other words now. Or at least it sounds like words to us. It sounds like he can say Ball, What, and Mommy. He can make lots of other sounds too. And he seems to only be shaking his head no when he actually means no. That’s progress 🙂

Damien is now 18 months old! His Be-Well appointment is on Monday so I’ll get his weight and an update on his health–which seems good to me.

The weather’s been so amazing here lately that we’ve been taking Damien outside a few times. He LOVES it. And by loves it I mean he will throw the worst tantrums I’ve ever seen from him when we do need to bring him back inside. I wish we had a fenced in yard so I could just sit and watch him. Instead I have to walk around next to him to make sure he’s not trying to run into the street. He certainly loves a challenge.