Scott is back from the UK so we got to spend the weekend together. Here a short video from today that I thought was adorable.

I’ve never really cared before about getting older, but for some reason 25 seems like a huge number. Maybe it’s because I will never be viewed as “young” again. Now, the next age to look forward to is 38 when I can retire from the military 🙂

Yesterday, my actual birthday, wasn’t the greatest. I tried to go grocery shopping with Damien in the morning, but the main road to my village was blocked off for a bicycle race. I checked at 5pm and it was still blocked so leaving was out of the question. There wasn’t really anything good on TV either. I did get to talk with Scott on the webcam for a little bit which was nice.

Today was so much better though. Even though I had to go to work, my office made me a cake–from scratch! It was so delicious. It was vanilla with the frosting that would normally be found on a German Chocolate cake. They also sang Happy Birthday and I got a card where everyone had signed it.  It reminded me of my 21st birthday when my supervisor at the time had made me an apple pie and I wore a party hat, haha.

Well, I made it to Damien’s 6 month picture in his scrapbook before I ran out of pages in his album. I do have inserts for more pages, but the screws aren’t the right fit so I guess I’ll have to purchase more before I can continue. I was so close to being caught up too!

I’m trying to figure out if Damien looks more like me or Scott. I thought he looked more like me at first, but without actual baby pics of Scott, it’s too hard to tell…

Here’s Damien and me at the grocery store on Sunday. Look at him sitting like a big boy! And the video is of tonight. He shows off my messy house, but I’m amused at how much Damien loves to try to grab things lol. 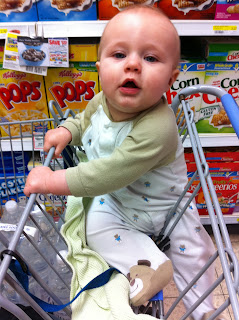 I went to the BX with Damien today to buy some printer ink so I could continue printing photos for Damien’s scrapbook. I’d been keeping my eyes peeled for a certain style of Coach purse in black. Well, much to my surprise, they had one available! Not only did they have the purse I wanted, but they also had a gorgeous clutch in the same style. I looked at the prices and stood there trying to decide which one to buy because now I had a decision to make. But then I thought to myself “why can’t I have both?” I spend so much time shopping and trying to find something that suits my taste, and here I had TWO items that were perfect. So yes, I bought both. A gift to myself for Mother’s Day and for my upcoming 25th birthday. My first designer purse and clutch 😀

My first mother’s day went well. Damien and I spent the day together and he was in a great mood. This video is from a while ago, but I really enjoy watching him make “bah”sounds 😀

Damien is interested in EVERYTHING these days. He’s reaching and grabbing for whatever he can. I was having quite a bit of fun with him tonight throwing a stuffed hamburger to him. He’s also acquired a new skill. He can now feed himself Cheerios 🙂

I signed up for 3 months of Weight Watchers online to give it a try and see if I like it. The system calculates points based on fat, carbs, fiber, and protein. I’m allowed 29 points a day with 49 “allowance” points a week. I have to say that the site is going to take a lot of time to figure out. It’s not that it’s hard to use. The site has a lot of information and it’s just going to take time to go through the different parts to read and understand. I liked the “build an omelet” module…too bad they don’t have that option for more foods. I’m also surprised at how much points something costs. I drink a protein drink in the mornings for breakfast and it costs 6 points. That doesn’t seem terrible, but the fact that I still need to eat something else in between that and lunch means the points really add up.

In short, the site is a little overwhelming which is over-complicating the weight loss process for me. I’m not done with it yet though…I did pay money for this! We’ll see how it goes…