So I decided that since I won’t be able to take Damien trick-or-treating, but still wanted him to have somewhat of a Halloween experience, I took him to my squadron’s Halloween party/chili cook-off tonight. Scott had to work. Anyways, Damien needed my constant attention which didn’t allow for me to really eat. He was also very uncomfortable and would randomly start crying. It wasn’t his normal behavior. He started saying what sounded like the word “home”. So I asked “Do you want to go home?” to which he very happily replied “yes”. So we left and he started acting normal again. Go figure. The photos below were taken after we got home tonight when he was in a good mood. 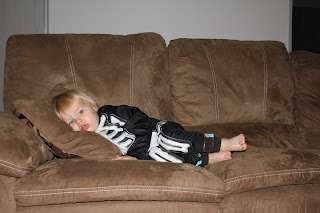 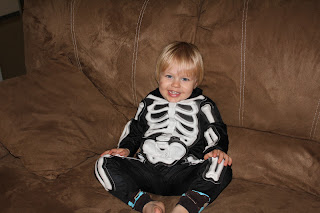 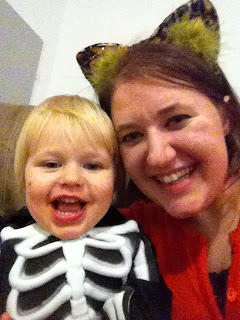 I figured people were curious about Damien’s leg braces so I took a couple pictures. Friday was his first day wearing them and he’s only wearing them a couple hours a day to get used to them and to check for any signs of blisters and whatnot. The braces aren’t very noticeable when he’s walking around in long pants, but I have to say that if you didn’t know what they were that it would seem like Damien had some serious mobility issues. So far, Damien has been just fine around wearing them and Scott said he felt he was walking and running better with them on. Next week Monday he’ll start wearing them to daycare. It’s unknown at this time how long he’ll need them. 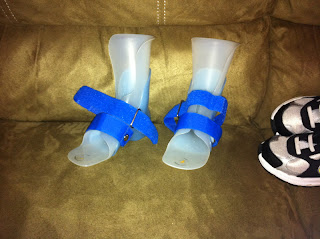 Today, my friend from work named Tina took Damien and me to the Dinosaur Park in Kaiserslautern. It turned out to be pretty fun since the weather was amazing and Damien was having a great time. He must have used up a lot of energy because I’m posting this blog and he hasn’t disturbed me once.

The photos are a little bit dark. I don’t have Photoshop installed on this computer to correct them so I’ll redo the photos at a later time. Just wanted to share and I’m impatient.

It’s been about a week since Damien’s started sleeping in the toddler bed. It’s not as convenient as the crib, but I guess he needs to learn sometime. It’s hard to get him to stay in his bed when putting him down for the evening because he knows he can just climb out. And it’s completely impossible to get him to take a nap in the bed. I’ve been settling for him taking a nap on the couch instead. While it may seem weird to post pictures of him sleeping, it’s actually a pretty rare event for me to actually catch him sleeping. Usually as soon as I walk into his room, he’s ready to roll. I’d also like to point out that Damien NEVER stays under the blankets. He takes after me 🙂 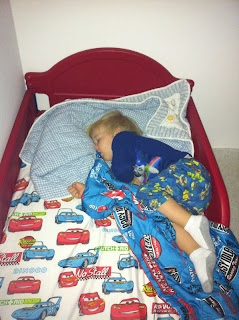 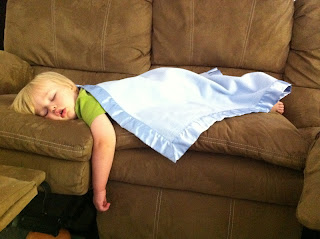 It’s the third night that Damien’s slept in his new bed and today was the first nap time. I have to admit, it’s been a little bit tricky to get him to go down now that he knows he can just get out of the bed. Nap time didn’t go well at all today. He wouldn’t stay in his bed and didn’t seem the least bit tired. So I eventually gave up trying to get him to lay down at that moment to see if he’d act tired later. He ended up passing out on the couch for an hour while watching TV. Not exactly how I wanted it to go, but at least he got his nap.

Damien makes a lot of noise. He has a heavy step and he tends to drop things a lot. The neighbors below me finally

I took a couple days off this week to relax and get a few things done. Scott was supposed to be back from the UK already, so I ended up assembling Damien’s toddler bed myself. I was pretty excited  for Damien to see it.

The video is dark in the beginning because it takes his bedroom light a moment to warm up. You can see the cut on his face from when he fell a couple weeks ago. I’m pretty sure it’s going to leave a scar 🙁

So you’re probably wondering how the first night went. I set up the baby monitor web cam (which I haven’t used in months) to see if he got up at all. He went down for sleep as usual and slept through the night as usual. This morning when he was waking up though, I saw his little legs reaching over the top of the bed. Not sure if he was trying to get down or not, but I don’t think he could see anything. He did stay in the bed until I went in his room. So overall, it’s been a success. 🙂

I was searching through our file server trying to select photos for a family photo collage I’m making for Damien so he can become more familiar with faces. Anyways, I came across these videos from when I’m guessing Damien is less than two months old. Aside from being amazed at how much he’s developed in the last two years, I realize how distance that really feels. I don’t really remember this period too much. I guess because it went by so quickly. And something else I’ve realized is that newborns aren’t that cute…

So the first video was taken when Scott and I were still using the government borrowed furniture when we lived in Bann. It’s pretty slow, but it amuses me when he makes an attempt at a smile.

In the second video, you can see he’s at the stage where he doesn’t know what to do with his hands and can’t control the movement very well. I forgot what he sounded like when he cried…If I never took these videos, it would have been lost in my memories forever.

And here’s an extra picture because well…it’s my baby. The green outfit was a gift from his Great Grandma Smith. 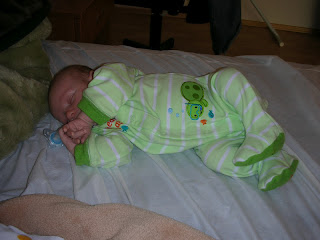