Damien will be turning two in just over a week–where does the time go?

He hasn’t had a full day in his new room yet, but the new teachers said he’s doing fine. He’s still learning all the new rules so I know it’s frustrating for everyone involved.

It’s hard to find things to keep Damien entertained sometimes. The latest activity I’ve found to do with him is to sit on my bed and look out the window. He enjoys looking at the cars and people below. While Damien is rather entertained by this activity, it’s pretty boring for adults. On the brightside though, there’s no mess to clean up afterwards and we can stay indoors–yay!

First, Scott and I took Damien to his first dental appointment yesterday. I didn’t know what to expect, but it went really well. His teeth are coming in just fine and are looking good. He also was very well behaved. He did cry during the spinning brush, but I can’t blame him for that and he bounced back quickly. He even did a great job keeping his mouth open 😀

And the second piece of news is that Damien got his transition letter at daycare to move to the 2 year old room – yay! So he’ll be transitioning over starting on 20 Aug. This is good news because Damien seems rather bored in the 1 year old room and is definitely ready for some more challenging tasks. I think I get to see his new room on Monday because Scott and I have a parent/teacher conference to discuss the move. I’m excited!

Here are some pictures and videos of Damien from this weekend. On Saturday, Damien wouldn’t take a nap and as a result, he went completely insane on me in the afternoon. It was one big tantrum after another. I’d never seen him act so out of control. Fortunately, he recovered on Sunday and was much better behaved.

These are from Saturday morning. He had that stick with him the entire time. It was very hard to get pictures because he kept avoiding the camera. 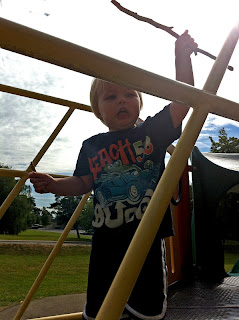 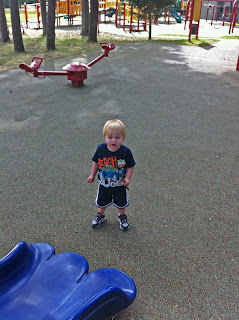 These are from Sunday afternoon. Instead of a stick this time, he found two large rocks. He could only pack around one at a time though. I eventually “lost” both of them lol. 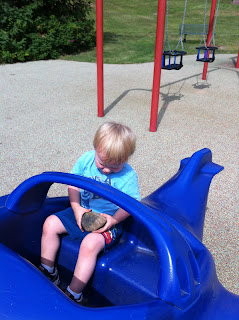 Aside from the rare moments when Damien is calm enough to cuddle with me, some of my favorite moments with him are when he’s focused on a task. I will always wonder what he’s thinking.

And lastly, just a quick picture of Damien from the other morning. Not sure if it translates to a photo how cute it was in real life. I rarely get to actually see him sleep and it amuses me to see how he ends up in the morning after a night of rolling around. 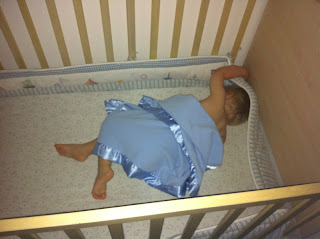