I took Damien to his follow up audiology appointment on Friday. It’s the first hearing test conducted since his ear infection cleared up. The lady said his hearing now is normal (instead of near-normal) and that all the tests ran looked good. Of course, there’s no way to tell how well he could hear with the fluid in his ears, but at least now we know it’s clearer. Since he’s not able to say much yet, Scott and I are debating whether or not to call EDIS to maybe see about ways to work with his speech. He can say “mama” and “uh-oh”. And he can make “b”, “d”, and sometimes “p” and “t” sounds. SOMETIMES it sounds like he’s trying to say “ball”. So hard to tell. I wonder too if he really has the desire to say different words. He says “ma” and “mama” for EVERYTHING along with pointing. So if he wants more of something, he goes “Maaaa?” If he wants up, it’s “Maaaa?” Anyways, if he’s getting his needs met by making the same noise and just pointing, then maybe in his mind he doesn’t feel the need to do anything differently. Just a theory.

On a side note, Scott and I have been sick. We had different colds for a while with different symptoms, but now I think I’ve caught what Scott had. It’s been over a week for me. I’m not sure if Damien caught it too or not because he was VERY cranky today. There were periods of time where he would just CRY and nothing made him happy. And because he’s crying, there’s all this snot so I’m not sure if it’s cold related or crying related. Nothing major though.

In an attempt to give ourselves more time, we’ve signed up with a cleaning service to have our house cleaned once a week. It’s going to cost more than I really wanted to spend, but I guess I never want to spend any money for something I can do myself…Anyways, we’re at least going to give it a try and see how it goes. If we don’t like it, then we can stop using it anytime. The hope is that it will eliminate some of the chores we need to do so we can spend more time doing the things we want to do and trying to relax after work.

Work has been especially stressful for me the past couple weeks. I even had to deal with an angry customer this week. I normally don’t get yelled at, but I ended up getting all the frustration of a person taken out on me for trying to enforce a policy. Then they ended up getting what they wanted anyways. Now that I’m on the topic I might as well explain. So, an organization didn’t turn in the correct paperwork to have something done. I received their incorrect paperwork on Monday. So as soon as I got it, I let the people know “hey, this isn’t the correct form, we need this instead”. Tuesday, I’m being yelled at for not giving them what they were requesting, even though they did the paperwork a while ago and I SHOULD HAVE said something a while ago and not just now. So I’m telling the guy I didn’t get it until yesterday and that I told them yesterday it wasn’t right. And his reply? “THAT’S NOT MY PROBLEM!” wtf? What kind of a response is that? I was so upset my hands were literally shaking. I’ve never had a response like that before. I wanted to say that it wasn’t mine either because all I did was do my job and it’s not my problem you can’t follow simple instructions. I mean honestly, if you want something done, you would save yourself a lot of time just doing what was asked instead of spending all your time on the phone arguing about it. And I’m completely off topic from my original post lol.

Damien’s booster seat came in the mail this week and we love it. It just works out so much better than that bulky high chair and he seems to like it too. Below is Damien eating his breakfast on Saturday morning. Then there’s a picture of Scott and Damien walking from the BX to the car. He’s been a little difficult when it comes to holding our hands and walking so we practiced with him on Saturday and he did better than usual. That’s all for now. 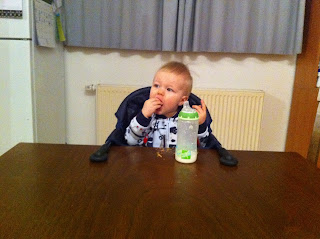 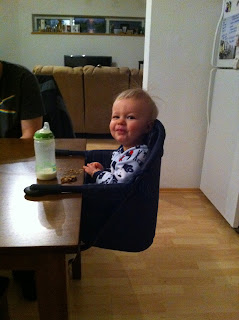 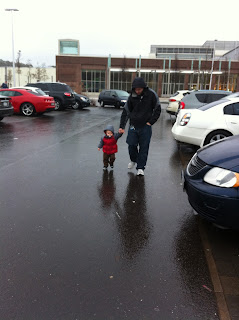